Skip to the content
Strongsville United Church of Christ 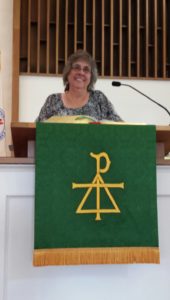 Pastor Heidi came to pastoral ministry later in life. She entered Ashland Theological Seminary at the age of . . . fifty . . . and discovered, with a little coaxing, the brain still worked well enough to complete her Master of Divinity in 2011, graduating With Honors. She became the Minister of Pastoral Care at University Circle United Methodist Church, serving alongside friend and colleague, Rev. Dr. Ken Chalker. After five years there, God saw fit to open a door in a new direction, and Heidi and her husband Chuck followed God’s leading to Strongsville United Church of Christ. Together, they are the proud parents of seven grown children and twelve grandchildren. They are excited about what God might have planned next for their lives together and for their church—together.